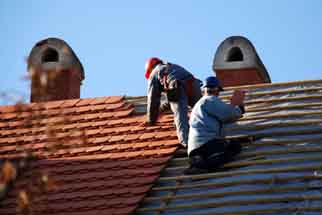 Consider a roofing accident where a worker falls through the roof of a building and is seriously injured. Allegations are made as to why and how this worker fell through the roof. Three questions are typically raised:

1. Was the worker provided fall protection?
2. Was there a construction defect ?
3. What was the relationship between the General Contractor (GC) and the sub contractors on the work site; specifically roles and responsibilities?

Lets consider the issues associated with each question above.

1. If the worker was working near a hole in the roof under construction, could he have seen the opening; were there visibility issues?  Had the employer taken the proper action to protect the hole as required under OSHA's fall protection requirements? Had the fall hazard been eliminated through the installation of a properly installed and marked cover?

2. If the roof gave way while the worker was working on it, was the original construction of the roof defective?  Should the defective or weakened structure have been identified during an inspection prior to commencing work? Had poor maintenance or faulty roofing that resulted in a degradation of the roof's supporting structure contribute to the fall?

3. Who owned the responsibility to ensure a safe workplace for the man working on the roof? On construction projects, which are typically multi-employer work sites, it is not always clear which parties were responsible. Did the worker contribute to or cause the accident by ignoring training that had been provided by his employer?

CED Construction Engineering experts (civil and structural) approach each claim with a well founded process. First the engineer will review the file which typically consists of construction drawings, photographs, contractor agreements, daily reports, witness statements and depositions. Next, the engineer will inspect the accident scene to qualify hypothesis and build credibility to his or her eventual conclusions and opinions. Visibility issues and construction (pre-existing & new) quality can be confirmed at the site. Sometimes, inspection is not an option as the worksite has been completed. The next phase of the engineer's work is to conduct an analysis of the accident scenario and pertinent OSHA and/or American National Standards Institute regulations. Oftentimes, this research and analysis phase confirms allegations of appropriate fall protection plan as well as construction requirements. It is also during this phase that the engineer will review the general contractor and sub-contractor contract agreements to confirm who had the role and responsibility of specific worksite safety.

The next stage of the engineer's work is to prepare a written report, as needed by client. This report will describe a scenario of what happened, discuss various safety regulations, introduce contributing factors, present a discussion of the relevance and then provide conclusions/opinions on liability for the accident. Finally, the engineer may be deposed and provide trial testimony based on his or her report.