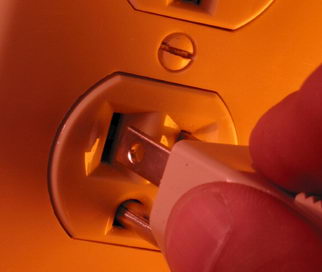 A key factor in helping fire investigators determine the cause of a fire is understanding electrical wiring product design. An issue that is often discovered is called “reversed polarity”.

Most home appliances in the United States use 110v AC power. The power cords for such appliances have either a three-pronged plug or a two-pronged plug with one prong larger than the other- the larger blade is neutral, the smaller is hot and the cylindrical prong (if present) is the ground. Plugs can only be inserted into outlets one way.t. Forcing any plug into an outlet the wrong way can result in reversed polarity and can be extremely dangerous.

On a standard outlet, which is technically called a ‘duplex receptacle’, there are two wires that carry electricity. One of these wires is connected to the earth, or ‘grounded’, so this wire is called the grounded conductor. This wire is commonly referred to as the neutral wire, and it should always be white. The other wire doesn’t get connected to the earth, and it’s called the ungrounded conductor, or hot wire. Because the hot wire completes a circuit by coming in contact with the earth, touching a hot wire while in contact with the earth completes the circuit and leads to an electric shock.

Reverse polarity can also result from an improperly wired wall outlet. If the hot and neutral leads are reversed at the outlet a properly inserted plug will have reversed polarity. Polarity on outlets can be easily checked with a polarity plug available in hardware stores.

Although electric products may still work under reversed polarity, the altered plug configuration bypasses safety mechanisms that would normally protect the product from potentially becoming dangerous. If a power surge travels to the outlet or product it is more likely to lead to a shock and, potentially, a fire. Additionally, the case or frame of an appliance or device can be energized and present a shock hazard when the polarity is reversed.

• History of shocks
• Failure of a product or appliance after a short period of time
• Fire or burn patterns on the outlet, plug, surge protector or grounded chassis
• No sign of electricity when the circuit breaker is not tripped

CED engineers have both the education and experience in investigating fires involving electrical products and appliances. These engineers can be an excellent source when reviewing a case or claim to ensure that every angle has been explored. Please call us at 800.780.4221 or please contact one of our regional offices to speak with a case specialist.