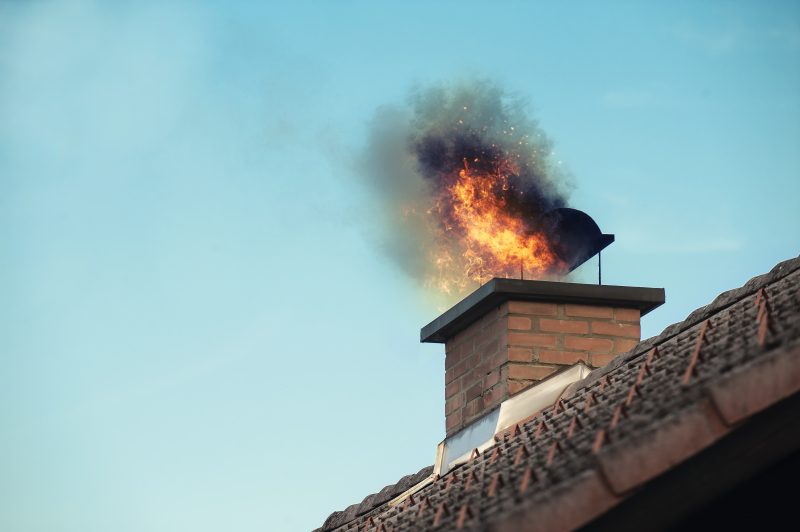 Now that the winter doldrums are setting in, it’s time to enjoy some long evenings by the fire –where we can hopefully relax and unwind now that the hectic holidays are over.  So grab that best-seller and curl up in your favorite chair… but NOT until you’ve scheduled your annual chimney inspection!!!  With all of the endless maintenance responsibilities and to-do lists of homeowners, this may be a tempting one to put off for a year or two…but it’s just not worth the risk, especially considering the frequency of chimney fires and the fact that the majority go undetected.

Most of us have probably heard of the primary culprit, creosote.  Creosote is a sticky or flaky, black tar-like substance that builds up inside chimneys when the condensation of smoke (including water vapor, gases, other minerals and particles) occurs as it exits through the cooler chimney.  As it builds up inside the chimney, the likelihood of it catching on fire increases, particularly depending on what kind of wood is burning.  Certain types of logs burn at higher temperature than others, and throwing boxes, wrapping paper and Christmas tree branches into the fire is never a good idea; only logs should be burned in a fireplace.

If a chimney is properly constructed and designed, it should be able to safely contain a fire without burning the house down.  But a hidden danger is that slow-burning fires are often undetected; unlike explosive ones which can sound like a freight train and are often visible to passerby with flames and dense smoke leaping form the top of the chimney.  In the “quieter” ones, the first chimney fire to occur may be relatively insignificant — but subsequent ones may inflict more damage or even be catastrophic because the structure has been weakened in a previous fire.  If there’s not enough clearance from the metal flue liner, a fire can ignite surrounding wooden rafters and roofing of the house.   In stone chimneys, sloppy or crumbling masonry can be the culprit; if mortar is falling out and cracks are developing, the heat is not contained properly:  “Most often, thermal shock occurs, tiles crack and mortar is displaced, which provides a pathway for flames to reach the combustible wood frame of the house” (CSIA).   A properly trained chimney sweep will know what to look for so it’s imperative that homeowners use professionals certified by the Chimney Safety Institute of America (CSIA).

One last tidbit, for the nature-lovers out there:  If the looming presence of creosote fails to instill enough fear for you to pick up the phone and schedule an inspection, perhaps another type of inhabitant who may have taken up residence in your chimney will: birds or squirrels!

https://www.csia.org/chimneyfires.htmlClick Here To See Our Full List of Experts Click Here To Submit an Inquiry about a possible Claim or Case.