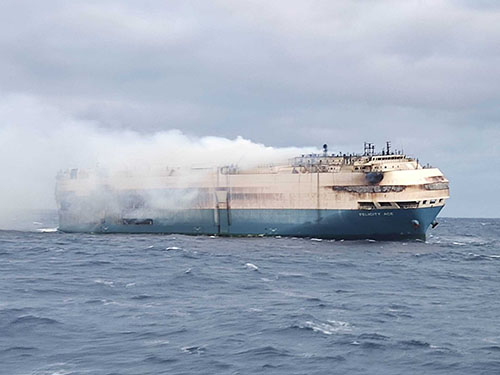 Felicity Ace, a cargo ship carrying approximately 4,000 luxury vehicles and steaming to the U.S. from Germany finally sank on Tuesday, almost two weeks after its crew had to evacuate and then abandon ship due to a massive fire onboard the vessel in the middle of the North Atlantic Ocean.  The 60,000 ton, 656-foot-long ship was carrying both electric and non-electric vehicles, and insurance experts have projected possible damages as high as $155 million.  (The collateral damage of ocean pollution has not yet been ascertained, but Felicity Ace was also carrying over two thousand tons each of oil and fuel).  How did such a catastrophic fire start, spread and ultimately sink Felicity Ace?   That is part of the investigation.  But here is what we do know.

On-scene reports indicated that the fire started in the ship’s cargo hold. Although there are multiple sources of fire onboard a ship, a potential source could have been a lithium-ion battery from one of the electric vehicles (EVs), which are most potentially dangerous when they are fully charged.  One ingredient in these batteries is highly flammable, and if the temperature rises above a certain point, it can experience thermal runaway, emit dangerous toxic smoke vapors and can explode.  Subsequent reignition is possible due to lingering toxic, flammable vapors in the air.  Fires which ignite from these highly condensed energy battery packs burn longer and stronger than non-electric car fires.  They are much harder to extinguish, take more smothering agents to extinguish, and can potentially melt the entire metal frame of the car.

Complicating the fire-fighting effort, many fire departments lack adequate training, knowledge and general fire-fighting capabilities particular to EV fires.  The first responders struggle to keep up with the rate at which the EV industry is ever-changing and growing because different tactics are required to fight these fires.  For example, the lithium-ion battery cells are contained in steel cases to protect them and help maintain their temperature, but in the event of fire, this also causes them to be harder to extinguish; firefighters must get extinguishing agents underneath the battery (https://www.youtube.com/watch?v=XWq-Mq1Uqpw)

Several European countries, Canada and eight states have pledged restrictions on the sale of emission-producing new vehicles in the coming decades.  This helps ensure that the wave of electric vehicles will continue to increase and will play a significant role in the future.  They are more energy efficient and cheaper to operate than fossil fuel driven cars, and they don’t release harmful environmental pollutants during use like carbon dioxide, all of which has led to increased consumer demand throughout the world.  But the question remains as to what potential risks loom within the lithium-ion battery packs that power electric vehicles.

(https://blog.trans-rak.com/the-problems-with-electric-vehicle-transport-the-solutions)Did EV lithium-ion batteries create a fire that contributed to the sinking of Felicity Ace?  So far the jury is out because a full investigation would need to be completed and the evidence is unfortunately residing at a depth of over 30,000 feet on the bottom of the Atlantic Ocean.  CED Technologies engineers have a vast background and expertise in investigating electrical and lithium-ion battery failures.