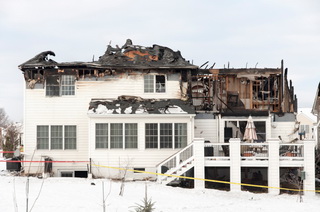 Who hasn’t driven home, seen a fire engine going the opposite way with their lights off and thought “I hope it wasn’t my house”?  Or asking yourself once you’ve left your home, “What appliance did I leave on and should I turn back to check?”A house fire is the worst kind of fire because often times the affected area’s destruction is total. Those who lived through a house fire have said that a tornado would have been less traumatic because there would be some hope of finding an item intact. Many times, these home fires can be prevented. When they do occur, CED Fire Experts are trained as First Responders to determine the origin of the fire and root cause.

According to the U.S Fire Administration (USFA), about half of all residential electrical fires involve electrical wiring. The most dangerous months for electrical fires are December and January due to the increase in indoor activities and lighting, heating use. An electrical fire that begins in the main living room results in the most deaths while the bedroom is the leading area of fire origin. Improper wire installations, overloaded circuits and electrical system failures are the primary cause of electrical fires which claim the lives of 280 Americans every year with more than 1,000 injuries. With smoke detectors properly installed, the property and human life loss can be minimalized. There are many other safety precautions to take into account. Some are:

Electrical fires in appliances or fixed wiring have a relatively low heat release rate, but when in proximity to combustibles or given time to smolder and spread, can result in significant property damage and risk to life. Signs of electrical arcing, per NFPA 921, are the primary way Fire Cause and Origin experts determine whether or not electrical arcing has occurred. Specialized knowledge and experience in fire spread, residential or commercial wiring, and/or appliances is needed to determine if the arcing was the cause and origin of the fire, or was a secondary result of the fire. Many CED Engineer’s are specifically trained as Certified Fire and Explosion Investigators (C.F.E.I.).

CED engineers have investigated numerous cases where electrical components or electronics were the major allegation of the loss or injury. Although the loss or fire may have resulted from the television, the electrical components such as circuit boards and internal fuses may need the evaluation of an electrical engineer. CED can assist in this area as we have both types of engineers that can work together on a comprehensive opinion to withstand the toughest critics.

The best way to determine cause and origin of any fire is to have an early, undisturbed inspection of the fire scene prior to demolition, reconstruction, or evidence collection.  This is why CED should be called earlier rather than later for involvement in Electrical Fires. Please call today at 800.780.4221 to discuss a possible case or claim.