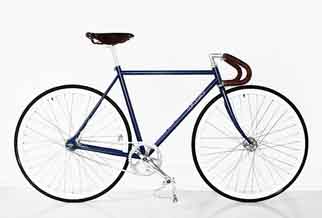 Forget about 28-speed mountain bikes, cruisers with big, comfortable seats or $3,500 auto-shifting bicycles. A growing trend in biking comes from 19th century tech: a bike that has just one gear, cannot coast and often lacks a feature prized by most cyclists and law enforcement officials – brakes. Fixed-gear bikes, or “fixies,” once home-built by riders or sold in boutique shops are now being mass-produced by major bicycle manufacturers. Some unfortunate side-effects of this recent popularity are the increased number of inexperienced riders using them and increased number of accidents involving fixed-gear bikes.

Taking a cue from track racers and bike messengers, a growing number of riders are buying fixies. Unlike standard 18-or 21-speeds, fixed-gear

models have pedals chained directly to the rear wheel so that whenever the wheel spins, so do the pedals. To stop, the rider has to slow down well in advance, or stand on the pedals with enough force to skid to a stop. Removing brakes and gears makes the bikes lighter and cheaper than feature-packed versions, and purists say they like these models for their simplicity and direct connection to the pavement.

But for all of their appeal, the bikes can be difficult (and dangerous) to operate. Because coasting isn't an option, stopping takes strength and concentration. A common mistake for novices who forget they are on a fixed-gear model is to stop pumping – and go flying over the handlebars as the pedals keep spinning.

In regulatory terms, the bikes fall in a gray area. The U.S. Consumer Product Safety Commission says track bicycles are “designed and intended for use in a competition.” They are exempt from federal requirements for standard bicycles, which call for bikes to have brakes at least in the rear. Because of this they are illegal in many places. Laws in most states where fixed-gear riding is popular – including New York, California, Maryland and Oregon – require that bicycles be equipped with a brake that enables the operator to make the braked wheels skid on clean, dry pavement. Still, fixed-gear cyclists in those states argue, often successfully, that the rider should count as the “brake” if he or she is able to achieve the same effect. To be on the safer side, bike shops generally advise customers to add hand brakes to models that come without them, and many riders do.

CED experts can investigate bicycle accidents from many different approaches, including quality inspection of the bicycle and its components, accident reconstruction and biomechanical analysis.