Golf Cart Accidents on the Rise-Revisited 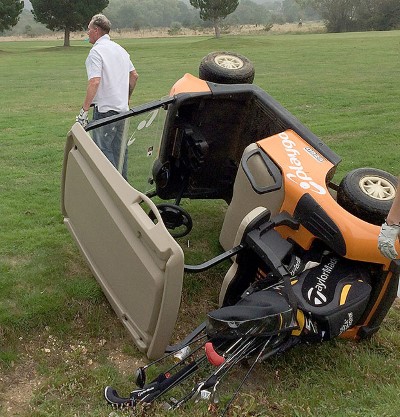 A quick internet search of “golf cart accidents” brought up these (and several other) stories (all written in the past six weeks):

Clarkson, KY – Man dies after being pinned under golf cart

Caledon, ON- Golfer injured in freak accident on Caledon course dies in hospital

Golf carts are, by design, supposed to be safe.  Most have accelerator governors that don’t let them reach speeds over 15 mph; they are weighted down with heavy engines and batteries and are hard to tip; and they typically are used on only smooth paved paths or manicured grass fairways.

The American Journal of Preventive Medicine, however, reports that injuries from being hit by or falling off of golf carts surged 132 percent from 1990 to 2006. Nearly 150,000 people, ranging in age from 2 months to 96 years, were hurt in golf cart accidents during that time.  One reason, according to the Journal, may be that golf carts have become much faster and more powerful. Reaching speeds of up to 25 miles per hour and traveling as far as 40 miles on a single charge, golf carts now offer quick travel in a variety of venues. They routinely used at sporting events, hospitals, airports, parks, college campuses, businesses and military bases, the study authors noted. In some gated and retirement communities, golf carts have become the primary means of transportation.

Golf carts typically aren’t subject to federal regulations, however, and users often don’t even need a driver’s license to operate one (in Florida, children as young as 14 can legally drive a golf cart). Many don’t have seat belts or stability mechanisms, and a common injury involves people falling off, particularly from the back.  A study in Georgia showed alcohol was a factor in about 59% of golf cart accidents.  Additionally, many fleets of carts aren’t regularly or properly maintained to detect potential safety hazards. It has been found in some instances that owners make mechanical alterations to golf carts, making them more dangerous. These and countless other factors contribute to the likelihood of an accident.

CED Investigative Technologies has mechanical engineers, accident reconstructionists and human factors experts who have investigated golf cart accidents all over the country.  If you have a case involving a golf cart, call us at 1-800-780-4221 or visit us online at www.cedtechnologies.com .