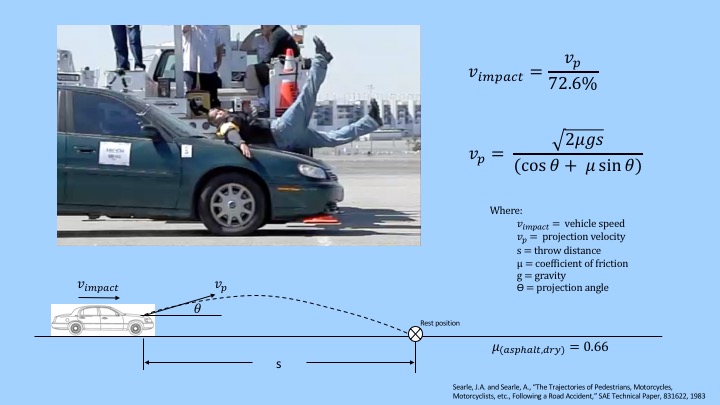 With the recent multiple accidents involving children being hit at school bus stops nationwide, we decided it was time to address pedestrian crashes and subsequent impact and trajectory of the victims.   Based on how and where the victim lands, how do engineers piece together evidence while attempting to determine driver fault and culpability?  This article will provide a brief overview of the three primary variables:  vehicle speed, vehicle shape/size and point- of -impact on victim.

On the surface, speed would appear to be the most obvious variable in determining how far a victim travels or how severe the damage to person or vehicle.  But the shape and height of the vehicle relative to the victim’s center of mass has just as much to do with how the grizzly scene unfolds and where the body comes to rest.

The center of mass is an engineering term that refers to the core or middle of the torso.  When a vehicle strikes a pedestrian at his center of mass, the result is a “forward projection”; the body is accelerated forward by the vehicle and lands in front of the vehicle.  Children are more likely to incur a forward projection due to their lower center of mass.  In contrast, when an average size vehicle hits an adult, it will often strike below the body’s center of mass, causing what is referred to as a “wrap” to occur.  Instead of projecting forward, a rotation occurs as the pedestrian’s feet fly up and he flips backward onto the hood of the car, often smashing into the windshield or vaulting entirely over the roof and landing behind the vehicle.   A “roof vault” refers to such a somersaulting movement and can occur with a direct center hit by the front of the car. A “fender vault” is more likely when the victim is struck by a front corner of the vehicle and bounces off the side.

Obviously a Mack truck (or even an SUV) has a much higher grill than a small sedan and will have a significant influence on what part of the body is hit and the resulting trajectory.  Interestingly, the primary point of impact in a pedestrian hit is seldom the principal cause of injury or death.  It’s usually the secondary impact (head hitting windshield or ground) or tertiary impact (head/body hitting ground after hitting windshield) that causes the most life threatening injuries.

CED mechanical engineers have decades of experience in vehicular crashes of all types.  Please call or email us if you require our comprehensive expertise in the future.  Visit www.cedtechnologies.com or call us 24 hours at 800.780.4221

Though stringent employee safety standards apply to construction workers, the need to protect the general…

According to the National Highway Traffic Safety Administration (NHTSA), there were 30,797 fatal motor vehicle…

Wipe your Feet! The Hazards of Slips, Trips and Falls

William English, whose exhaustive research on slip resistance resulted in his creation of the Tribometer, a machine which…