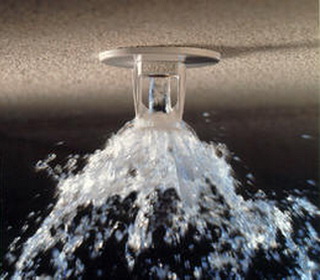 When activated, a typical wet-pipe fire suppression sprinkler head has an output anywhere from 10-30 gallons of water per minute until someone arrives to turn it off.  Many commercial systems are monitored to notify emergency personnel that a sprinkler is activated, minimizing the amount of time water is flowing.  Sometimes monitoring fails, and water can run for hours, even days before it is realized.  This can lead to major damage and costly repairs.

Pre-action fire suppression systems are specialized sprinkler systems often found in museums, libraries, archives, refrigerated areas, computer rooms, data centers, and other sensitive areas where activation of a traditional wet pipe sprinkler system could result in water damage to valuable artifacts, sensitive information or electronic equipment.  Pre-action fire sprinkler systems employ the basic concept of a dry pipe system in that water is not normally contained within the pipes. The difference, however, is that water is held from piping by an electrically operated valve, known as a pre-action valve. Valve operation is controlled by independent flame, heat, or smoke detection.  Soon following, individual sprinkler heads are designed to release water flow onto the fire.  In some instances, the pre-action system may be set up with a double interlock in which pressurized air or nitrogen is added to system piping. The purpose of this feature is two-fold: first to monitor piping for leaks and second to hold water from system piping in the event of inadvertent detector operation.  Depending on the goal of the specific pre-action system installed, they can be configured with a pre-alarm that indicates a possible fire condition. This early warning can allow time to extinguish a fire before sprinkler discharge and the subsequent damage of property.

At CED Investigative Technologies, we have several engineers who have expertise in all types of fire suppression systems.  If you have a case and would like more information on our experts, please call us today at 800.780.4221  or visit us online at www.cedtechnologies.com.