Storms Can Cause Structural Damage to Homes, Commercial Buildings & Infrastuctures 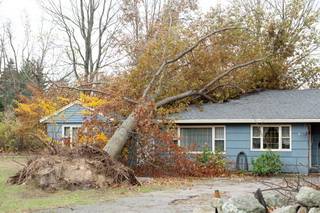 When you look up the word “storms” on the internet results include:  winter storm, ice storm, tropical storm, hail storm, rain storm, lightning storm, hurricane, tornados plus stories such as “the latest Saturn storm had a major effect on the atmosphere by creating meandering jet streams and forming giant vortices.” Although the “Saturn storm” might sound interesting, we need to be concerned about the storms here on earth.

Many natural disasters cause structural damage to homes and critical infrastructure. Typical indicators that raise the structural flag are cracking and tilting of building structures and/or separation of walls and buckling of floors. Of course, the next question becomes: what caused these indicators? It is not always the storm.  In some cases, the cause is settling of land initiated by a disturbance in the water table, possibly resulting in sink holes or erosion. Another possible claim, which needs to be confirmed by an engineer, might be neighboring construction (blasting or vibration) or increased motor vehicle traffic, which can cause the settling effect or vibration leading to deterioration of the structure.  During an investigation, the engineer examines the cracks: the sharpness of the edges, growth of the cracks, the relative age of the cracks, older paint present, and other witness marks to determine whether the storm actually caused the damage.

Hurricanes and extreme rain storms typically lead to excessive rainfall that ultimately collects, pools, and contributes to flooding.  Storm water that does not pool or soak into the ground becomes surface runoff, which either flows directly into surface waterways or is channeled into storm sewers, which eventually discharge to surface waters. For these types of disasters, we provide engineering experts with storm water management expertise as well as experience to understand what damage was caused by wind and what damage was caused by flooding.

After a winter storm, excessive snow on roof tops can cause roof surface damage and even structural damage.  Structural engineers look at these structures to determine if the weight of the snow or poor maintenance caused the roof or structure leaks, damage, or in severe cases, collapse.

Weather related damages not only require a detailed inspection, but also the historical weather data to which the structure was subjected.  When looking at damage to a structure or bridge, the engineer examines the building materials to make sure they were adequate for the expected weather.  Did the builders comply with the appropriate building codes and use the suitable materials?  Also, when external defects or damages are alleged to have led to other internal damages, experts compare the external and internal damages sustained inside the structure.  They can then decide if the two are consistent and whether potential defects involving the structure could have led to the damages.

What about lightning storms, which are so different from other storms? Businesses can protect themselves with a variety of lightning protection systems as certain items such as telephones, modems, computers and other electronic devices can be damaged by lightning through the phone jacks, network cables, and electrical outlets. When these electrical storms occur, engineers investigate fires allegedly caused by lightning strikes.  They follow the science behind fire “origin and cause” investigations.  When investigating lightning strikes, they scrutinize whether companies adhered to NFPA 780 installation standards.  They also look at the damage to discover the origin and to determine if lightning caused the fire.
The wide variety of storms and the types of damage that occur in each can be somewhat similar; however, they can also be very distinctive for a trained eye.  Civil, structural, and electrical engineers look at these differences to determine the cause of the damage and the level of structural integrity.  For more information on investigating storm damage or how a civil, structural, or electrical engineer might investigate your claim or case, contact us at 800-780-4221.