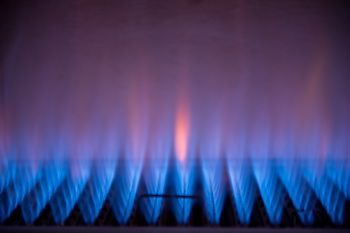 Have you flipped your switch?

The season is changing.  Cold weather is creeping up and with it more thermostats in homes and businesses are being switched from “A/C” to “Heat”.

Flipping that switch also means changing the type of fuel used to control the temperature of your building.  Air conditioners use electricity to power the compressors and blowers found in those systems.  Although heating systems use electricity for some of their components, most heating systems rely on a process called combustion to produce the actual heat.

Often thought of as fire, combustion is actually a chemical reaction between a fuel (such as natural gas, propane, oil, wood or coal) and an oxidant (generally oxygen contained in normal air).  This chemical reaction produces light and coincidentally:  Heat!

All fuels that would be burned to heat a building generally contain the elements Carbon (C) and Hydrogen (H).  Heat is produced when C and H combine with oxygen (O) during combustion.  Simply said, heat is produced when you mix fuel with air and ignite it.  But how much fuel and how much air?  Fuel will burn as long as there is enough Oxygen to feed it.  So naturally, the focus moves to finding and keeping the perfect balance of fuel and air.

Combustion is incomplete when the fuel does not unite with the maximum amount of oxygen.  When one atom of C unites with only one atom of O, it forms CO, which is… you guessed it:  Carbon Monoxide.
Unlike CO2 or Water vapor, Carbon Monoxide can injure and will kill you.

To be clear, perfect and complete combustion efficiency is not realistically achievable.  In addition to heat and light, there will always be contaminants present.  Although some incomplete combustion is normal, a heating system should be periodically inspected for worn or clogged components as well as routinely tweaked for maximum efficiency regarding the fuel/air mix ratio.  When standing at the thermostat, it is easy for one to forget that a simple decision at the switch brings powerful forces into play.  Heating systems are inherently dangerous and should be designed, installed and maintained with the utmost care.

It follows that having a sufficient supply of fresh air is important to any fuel burning appliance; safety and efficiency are optimized, the closer the fuel/air mix gets to complete combustion.  In older designs, this air would come from whatever room the furnace was located in.  There would hopefully be enough air leaking into the building from small cracks in the walls or around doors and windows to replenish the air taken for combustion.  The danger with this design is that since the air originated from a living space, there is a possible pathway for Carbon Monoxide or other contaminants to go back to that living space.

With modern homes more tightly constructed and better insulated, it has become a more common practice to have a dedicated air supply from outside, leading to the burner.  This is a much safer design as there is little chance that the air used in combustion will ever mix with the air used in living spaces.  However, since the building itself is more resistant to air leakage, if anything does go wrong, air quality inside the building is quickly affected as there is little fresh air introduced to dilute the contaminates created by incomplete combustion.

During incomplete combustion, the Carbon atoms within the fuel that cannot find any Oxygen atoms to unite with are deposited as Carbon.  Another name for this is soot.  In addition to damaging your property and potentially blocking proper air flow/exhaust, soot in the air can be breathed in and thus cause or exasperate existing health problems.

At least soot has the decency of letting you know it is there.  Along with a smoky-ash smell, there may be a fine black power around the joints and connections of the metallic duct work that leads the exhaust outside.  There may also be evidence of discoloration around the inside registers/vents of an affected building.  Carbon Monoxide on the other hand, has no such decency:  CO is a colorless, odorless and tasteless gas that kills hundreds of Americans each year.

Modern heating systems express wonderful innovations on technology and have brought improved productivity and quality of life to millions.  Just remember that when you flip your switch, you are standing at the tip of an iceberg; there is much more going on than you can see!

CED engineers have investigated the harmful effects of heating systems for over 25 years.  They are trained and experienced to evaluate a heating system at the levels of design/configuration, workmanship/components as well as maintenance.

Submit a case or claim online.
Contact a CED Engineer in your region.