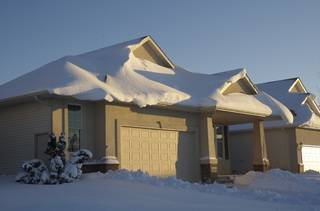 Winter can be a difficult time of year. It is not just the short days and longer nights, but the weather. This year, two thirds of the continental United States has been blanketed by snow and other frozen accumulation and even Florida has had to contend with frosts on walkways and other surfaces.  CED Technologies Inc. has a vast amount of experience and expertise when it comes to investigating losses related to environmental matters.

Roof/Structure Collapses
The first step in a roof collapse investigation is to classify whether the roof was a pitched or flat roof. For a flat roof, which is where most of the collapses occur, the engineer needs to perform a site inspection and review the specifications and design drawings for the structure. The engineer will look at many different aspects of the design, but one that is particularly germane to a collapse is what is called “secondary deflection” which causes “ponding.” Secondary deflection refers to the deflection beyond the initial, or “primary deflection”, and happens because the primary deflection forms a “pond” that allows more water or snow to accumulate on the roof. This also allows any condensation that may be created by the heating of the roof from inside to progressively collect in the middle of the roof. This increase in load can ultimately result in the collapse. If the engineer suspects such a problem, then he or she will begin to research further to look for the cause.

1. Did the owner add unplanned weight on the roof structure? Many times, owners or users add equipment for which the roof was not designed. Equipment such as air conditioning system components can be extremely heavy. Making matters worse by increasing the ponding and stress, these units are sometimes placed in the center of the roof top to make them less noticeable from the ground.
2. Was there a “collateral load” imposed on the roof structure caused by the attachment of equipment to the bottom of roof structural members, thereby creating an additional load on the roof over what was specified in the original design?
3. Was the event a “code event” that surpassed what the acceptable code required for the building and was therefore, unforeseen? In the Boston example, the engineer researched the amount of accumulation for January 2011 which was 3.64 inches of solid accumulation. The engineer then calculated that the load imposed by the snow accumulation was approximately 18.2 lbs/sq ft. Comparing the applied snow load of 18.2 psf to the code required design load of 50 psf for the Boston area indicated to the engineer that this would not be classified as a code event.

The engineer would also look for clogged gutters and the non-removal of accumulated snow and/or water, as this can be a cause for a collapse.

Other Factors
Besides the site inspection, the engineer must also investigation other potentially contributing factors. Some of these include:

1. Construction Modifications – did the owner of the building make modifications to the roof such as removing trusses to create a cathedral ceiling, or other modifications without consideration of the initial design and capacity of the roof structure?
2. Built to Code – Was the roof built to the code of the governing body?
3. Built according to plans and specifications – Did the contractor used the materials and equipment specified by the plans and specifications?
4. Plans and Specifications to Code – Was the structure designed per the governing body codes?
5. Reasonable Owner Maintenance – Did the owner of the structure practice reasonable maintenance to make sure that water/snow wasn’t able to accumulate on the structure, and that snow melt and rain were able to efficiently drain, thereby mitigating any load increases?

Premises Liability Accidents
Winter can be particularly challenging when it comes to premise liability accidents and determining causation. CED engineers have extensive training in this area also and start the investigation by planning a site inspection. During the site inspection, the engineers will look for such things as:

• Flow of water on walking surfaces.
• Snow or ice removal – was the surface prepared as required by code?
• Warnings such as signage or paint surface to alert the traveler of potential hazards.

After the site inspection, the CED engineer will begin the investigation of researching any and all municipal and building codes along with any supportive research to determine if the surface was prepared or designed properly to code. Based upon the research and analysis, the engineer will then be able to determine probable causation and any contributing factors.

Investigating weather-related accidents can be challenging because the condition for which the accident occurred can change rather quickly. The best advice to assist in the investigation is pictures and documentation as soon as the accident happens to have a point of reference should a claim or litigation occur. If this documentation isn’t available, CED can still be a powerful asset providing expertise for such accidents for over 26 years. For more information on CED please check out our web site at www.cedtechnologies.com – call us at (800) 780-4221 – or via E-mail at casemanager@cedtechnologies.com.