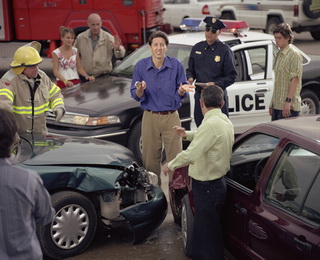 Eyewitness identification is one of the most potent and effective tools available to police and prosecutors.  It is compelling, and time after time, it convinces juries of the defendant’s guilt or innocence.  The problem is, eyewitness identifications are WRONG at least 50 percent of the time according to truthjustice.org.  However, with the various scientific techniques available to our engineering experts, CED can help discover when an eyewitness may be mistaken.

Because people have preconceived ideas of how individuals should react in a given situation, many eyewitness accounts are inaccurate.  Unlike a video camera, people are not always exact in their reporting.  When accidents/incidents occur, witnesses often times state what they think should have happened rather than what really took place.

Perception can be unreliable as in the true story of a military man from New Orleans who, while walking through an airport in Japan, sees a man walking toward him.  The military man briefly thinks there is something familiar about the way the man walks but continues to proceed to his destination.  It was not until the approaching man speaks that the military man realizes it is his own father.  He never perceived meeting his father in Japan; therefore, he does not recognize him.

CED works on cases where witnesses give differing accounts of the accident/ incident or where individuals blatantly lie about their involvement in an accident.  Because eyewitness reports can be suspect, our engineers use experience and technical resources to help clients expose the truth through scientific methods.  For example, when investigating a vehicle hitting an individual the police report, photographs and witness statements are reviewed but CED also looks at the bruising on the victim to discover what features on the vehicle match the injuries.  With this information, our biomechanical engineer determines the position of the victim at the point of impact, giving our clients more scientific evidence at their disposal.

In various slip and fall cases, CED’s investigations proved the injuries could never occur the way the insured parties reported.  Our biomechanical engineers were able to demonstrate it was physically impossible to fall or obtain injuries as described.

In conclusion, in order to decrease the 50 percent chance of error in witness statements, when interviewing witnesses, the following steps are known to help obtain the facts (not perceptions):

1.     talk with the witness immediately after the accident/incident;
2.    speak with them privately in a quite location without the input of others;
3.    if possible, either video tape or use a digital recorder during the interview;
4.    do not lead the witness, let them tell the story in their own words;
5.    finally, have them write down their account of what happened.

Most importantly, after following the above suggestions, if witness statements still conflict, or you are not sure about the sequence of events, call CED to help determine what really happened.