You’ll Shoot Your Eye Out!

You'll Shoot Your Eye Out! 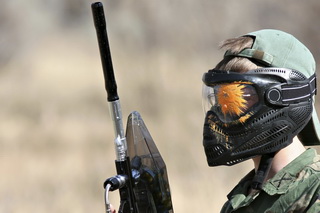 In the movie, “A Christmas Story”, a 9 year old boy desperately tries to convince his parents, teachers, and Santa that a Red Ryder BB gun really is the perfect gift for the 1940s.  His pleas for the toy however, are constantly met with the warning, “You’ll shoot your eye out!”  One can easily image that same situation being played out today, but with the modern equivalent of the Red Ryder BB gun:  the paintball gun.

Paintball guns found their beginnings with forestry groups and farmers who used to use them to mark trees and cattle.  Often referred to as “Markers”, paintball guns lurk in the area between toy and weapon, much like BB guns, pellet guns and air rifles.  Perhaps they should be defined as weapons that can be used in cautious play.  Unfortunately, they are often times simply seen as toys that can be dangerous at times.  This difference may seem subtle, but the caution and respect given to weapons is not necessarily transferred to dangerous toys.

The classic Daisy Red Ryder (still available) shoots BB’s with a velocity of 350 feet per second.   At that speed, a BB can travel the distance of a football field in less than a second.   So, obviously one of the potentially dangerous aspects of a paintball gun is that it too fires a projectile at a fairly high rate of speed.   Even though this projectile is a paint-filled gelatin capsule designed to break apart upon impact, the capsule still has an associated mass and thus the potential to cause injury.  The Paintball Sports Trade Association quotes the industry standard for safe speed of a paintball at 300 feet per second.  However, a paintball travelling at or around this speed can still cause enough damage as to lose an eye.  For this reason, paintball guns should always be combined with safety equipment, such as eye/face protection.

Paintball guns typically use controlled bursts of expanding gas to propel the paintball forward through the barrel.   This brings us to a deadly danger associated with these products:  the power source.  The reservoir tanks that hold compressed gas come in various sizes (up to 20 oz) and danger enters into the picture when the user is installing or removing a pressurized tank.  If the fitting that secures the canister to the gun is tampered with or malfunctions, there is a potential for the canister to become a lethal airborne torpedo.

The technology around these products has advanced over time, beginning with bolt-action, progressing to pump-action, then to mechanically fired semi-automatic, and finally culminating in electropneumatic.  Ah… the electropneumatic paintball marker…the holy grail of speed firing!   Electronics are used with the trigger mechanism (which can be feather-sensitive) and the firing rate can be fierce.  The world’s fastest paintball gun can allegedly spit out 54 paintballs per second (Dodge that!).  However, most games are limited to 13 to 15 bps for very practical reasons.

The paintball gun has dramatically evolved from a simple tree marker to a complex device with multiple designs that vary in methods of powering, firing and loading.  Organizations and clubs have sprung up to not only manage players, locations and equipment but to also create and enforce rules of play.  These organizations have helped reduce the number of injuries associated with the sport.  For if properly played, paintball games have been argued to be statistically safer than golf or bowling.  The popularity of paintball is without question and it remains one of the fastest growing extreme sports.

Although ASTM International provides standards for the design, testing, packaging and labeling of paintball guns, they largely fall under the jurisdiction of The Consumer Product Safety Commission.  Its role is to protect the public from unreasonable risks of injury or death associated with consumer products.  It takes an active role in developing, issuing and enforcing mandatory standards as well as recalling or providing warnings related to product hazards.

The efforts of the CPSC, along with organized paintball sports and education, attempt to keep up with the rapid evolution of the game and equipment with an eye toward safety.   If an accident needs to be investigated, engineers qualified to evaluate the design, use and applicable standards can be found at CED Technologies.   Although the paintball gun may have replaced the BB gun as the lethal weapon of choice for kids, the phrase, “You’ll shoot your eye out, kid,” forever remains good advice indeed.

For more information on CED or how we can assist you on your current or next case, please feel free to contact one of our case managers at casemanager@cedtechnologies.com or call 1(800) 780-4221.