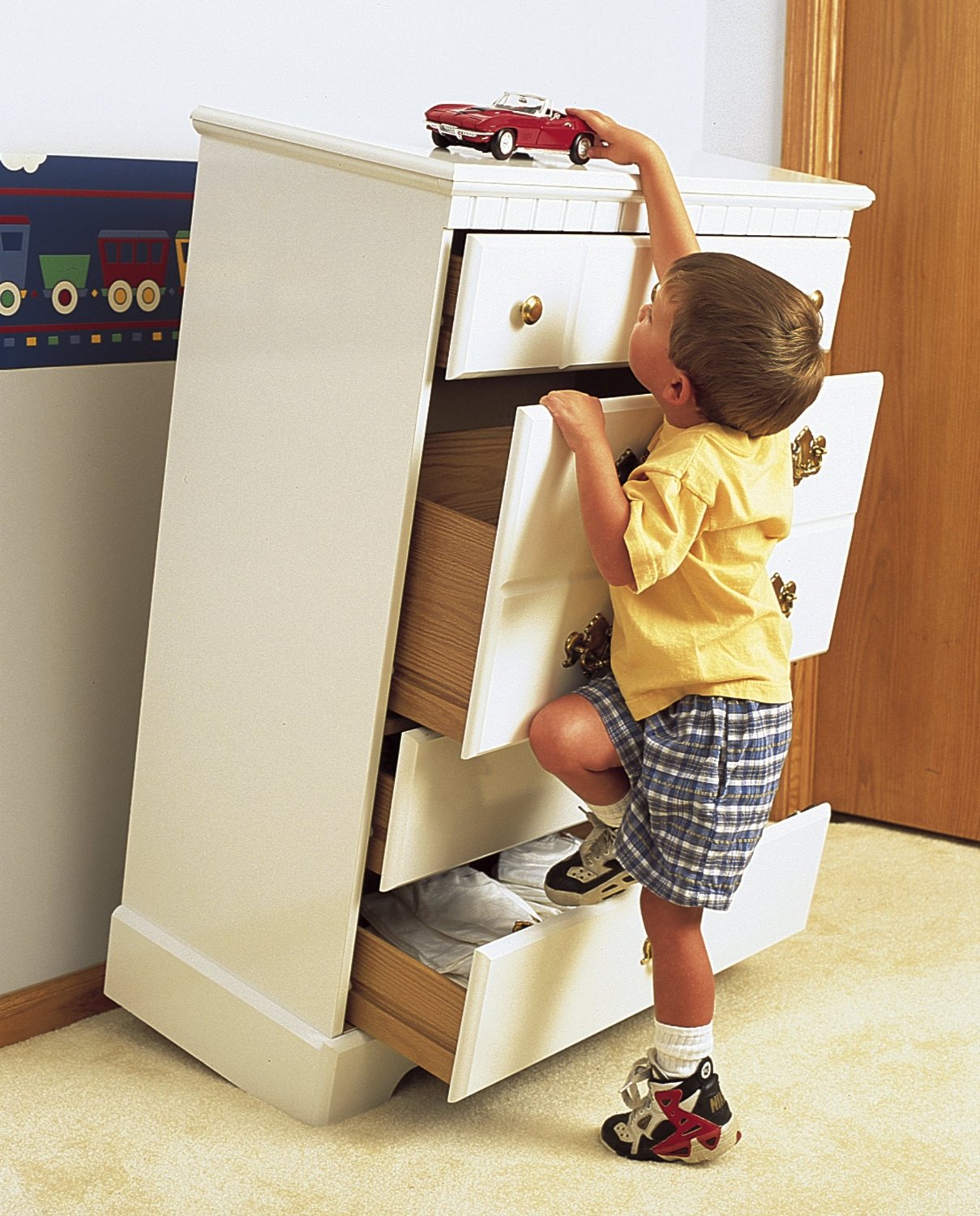 Two-year-old Bowdy Shoff is being hailed a hero after rescuing his twin brother, Brock, after he became trapped under a dresser. The twins' mom says she was asleep and heard nothing from the other room when the dresser fell on their 2-year-old son, but a nanny cam used to monitor the boys recorded everything. The two were climbing on the dresser, opening drawers to climb higher, when their weight tipped the dresser over. It landed on Brock, and Bowdy acted immediately, looking for ways to get his brother out. After about two minutes a couple tries, he was able to push the dresser off.
Chances are that you've seen the uploaded nannycam video of this instance that went viral last week. Occurrences of furniture tipping onto people are rarely caught on video, but are anything but uncommon. Unsecured appliances and furniture are among the top hazards for children at home, according to the Consumer Product Safety Commission. A recent report by the agency estimated that from 2013 to 2015, 33,100 people were treated annually in hospital emergency rooms for injuries involving appliances and furniture. More than half involved children under the age of 18. And in 61 percent of the cases, the injuries were caused by furniture falling or tipping over.
The American Society for Testing and Materials (ASTM) placed standard F2057 “Standard Safety Specification for Clothing Storage Units” in 2000. It was updated in 2004 and again in 2009. It applies to all storage units, not just those designed for youth bedrooms. The 2009 revision added the requirement that all furniture covered by the standard be shipped with a tip-over warning label, tip restraints and directions for installing the tip restraints. The 2014 revision makes a modification to the tip-over testing protocol, is accompanied by a new performance standard for tip restraints.
Last summer, IKEA voluntarily recalled all chests and dressers that did not meet the requirements of the most updated version of the standard. At least 41 tip-overs and four fatalities were associated with the MALM furniture collection, which was part of the 29 million unit recall.
According to a recent research report by Kids In Danger (KID) and Shane's Foundation (two nonprofit groups dedicated to child safety), parents can take some steps to avoid furniture tip overs by taking the following actions when buying furniture:
* The report found that price and weight are not necessarily correlated to stability. However, consumers can look for design features that increase stability – a wider base, heavier back panel (especially towards the bottom), or interlocking drawers.
* If the furniture feels unstable in the store, it will be unstable. 
* Look for proof that the furniture at least meets the current ASTM F2057-14 standard. Call the company if necessary.
The report also mentions taking the following steps once furniture is in one's home:
* Anchor your furniture. None of the furniture causing injury or death in the reports had been anchored. So just do it! If your furniture did not come with a restraint, report it at www.saferproducts.gov.
* Do not put a TV on furniture not intended for that use. When you place a TV on the furniture, push it as far back as possible and anchor that to the wall as well.
* Keep TV and cables and cords out of reach of children.
* Keep remote controls and other attractive items off the furniture so children will not be tempted to climb or grab for them and risk knocking over a TV or tipping the furniture.

CED Technologies, Inc. has investigated several cases involving furniture tipping over and has several experts with expertise in engineering design, human factors, warning label design, failure analysis, safety, code compliance and standard review. If you have a case involving a furniture tip over, visit us online at www.cedtechnologies .com or call 800-780-4221 to discuss your case with one of our experts.