With all the contemporary efforts to exclude experts from testifying in retail safety, now is the time to consider using engineering experts to opine upon the science in retail display accident cases.

It happens more often than you think. Displays and end caps in grocery, department and convenience stores allegedly fall and injure people. Many parties claim they were just walking by the display and the items unexpectedly fell on them. Did the items fall without contact or was there human intervention? There is science in how displays are put together. The physics of objects falling usually includes a force that initiates the incident. 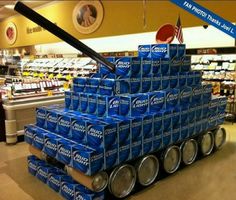 Individuals pushing and shoving one another can cause products to tumble down as they accidently fall into the display. In some claims, a shopper merely brushes up against the display and a catastrophic event happens. On other occasions, individuals pull supporting items from the middle of the stack rather than taking them from the top. This can cause the display to tumble down. So yes, displays must be designed to structurally accommodate the various sized products that are stored and displayed. Incorrectly arranged displays are unstable and collapse with minimal force such as brushing against the stacked items. Building codes define retail store construction and means of egress to avoid creation of trip hazards, but codes do not exist for retail display fabrication.

ASTM E678 states that persons engaged in forensic investigations are responsible for identifying significant data. They then analyze and correlate the data and report conclusions and opinions. These opinions should be supported by the data, reported in a form that is understandable to a layman familiar with the incident, and capable of being evaluated by knowledgeable scientists, engineers, or investigators.

The best way to scientifically justify or deny these claims is through testing to surmise if the description of the event is true or false. An engineering expert may help an attorney or adjuster decipher truth or fiction by developing testing protocols to replicate the accident scenario and then perform worst-case scenarios if the reconstruction does not coincide with how the accident was explained. Engineering experts reconstruct these accidents by building duplicate displays and applying various forces to the displays to determine stability. Furthermore, a biomechanical engineer can quantify the force required by a person to initiate instability in the display.

As with any testing, the facts must be carefully reviewed before conducting any tests. In lieu of a site inspection, which usually cannot be conducted due to length of time since the incident, photographs, witness statements, accident reports, etc. can be used to fully understand the accident scenario. From this information, the expert determines the shape and height of the display as well as the number of items on the display. They also look to see if interlacing, cross hatching or other means of stability augmentation were used.

After gathering all of the information, the expert uses it to recreate the display and perform stability tests. The testing can be documented with video, photographs and notes which are used to create a report, answer questions at a deposition, or be viewed by jurors at a trial as demonstrative evidence. It is this scientific method, which can be applied to display mishaps, that will strengthen an expert’s opinions and provide powerful demonstrative evidence as ammunition to fight the legal fight.