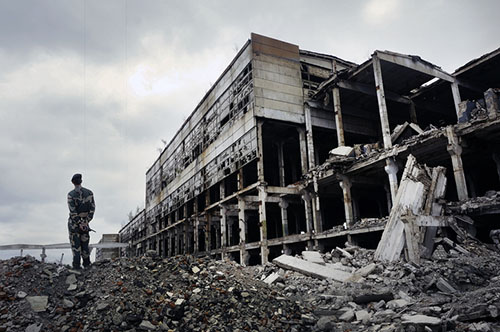 The images of the daily destruction as Russia unleashes its wrath on Ukraine, reducing towns and cities to rubble, are shocking and heartbreaking.  Due to his indiscriminate bombing of civilian targets and populations, Putin has the world wondering how Ukraine will build back after such catastrophic environmental carnage.

From an engineering standpoint, a fundamental challenge will be to determine the structural strength and safety of the buildings left standing once the war is over.  The antiquity of Ukraine, a country with a vast cultural heritage, will not help the situation of such collateral damage.  During a blast, energy waves are transmitted through the ground and can weaken the foundation of nearby buildings, especially older or historic structures which were not built with the stronger materials –like steel — of the modern era.  A good analogy of how ground vibrations are transmitted is the effect of dropping a stone into a pool of water.  Past the impact point, the energy can be seen traveling away as waves https://explosives.org/vibration-basics/ground-vibration/.

After 9/11, for example, it took years to determine how many buildings were compromised in the vicinity of ground zero.  Many buildings looked relatively unscathed but ended up having to be razed in the end, after engineers inspected and found the buildings unsafe.  It’s devastating to consider the likes of an 11th century Kyiv church having to come down after withstanding shelling. (https://theconversation.com/ukraines-cultural-heritage-faces-destruction-as-russian-bombing-continues-178563).

Heavy duty construction projects which involve excavating and jackhammering require careful monitoring in “the built environment,” especially in older or historic areas of cities.  The threshold for vibration levels in these urban areas (like New York city) is dramatically lower than threshold requirements in non-historic areas, because such aged structures are susceptible to masonry cracks and cosmetic cracks in fragile plaster.  Another way proximal structures can be compromised during construction is by settling.  Older architecture did not have the same standards for (nor use the same type of) fill beneath foundations.  Excessive ground vibrations can cause a building to become tilted as it settles unevenly into sub-par fill, with obvious repercussions and costly remedial interventions necessary.

Property Claims: When to Call in an Expert

For those in the property claims field, the question often arises, “What is forensic engineering…