Work Zone Safety with Infrastructure Projects on the Rise 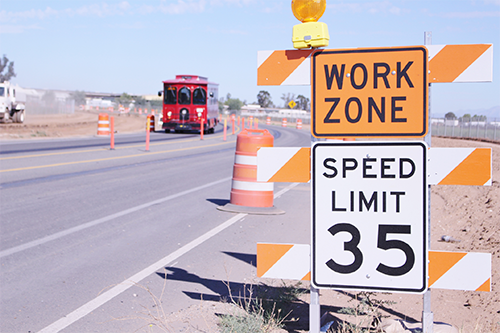 Recall the last time that you were driving on a congested highway – drivers are slamming on their brakes just to speed up again seconds later, the car in the lane next to you is inching their way into your lane to eventually cut you off, and you are just trying to make it home safely after a long holiday weekend with the in-laws. Sound familiar? Highway driving can be stressful, and highway work zones can add fuel to the fire. According to the World Health Organization, approximately 1.3 million people die each year because of road traffic crashes, and more than half of all road traffic deaths are among vulnerable road users including pedestrians, cyclists, and motorcyclists. Moreover, work zones frequently require traffic pattern changes and rights of way. They also involve workers and work vehicles in the construction zone, which can bring on a greater risk of crashes, injuries, and fatalities.

Recently, we have seen an increase in work zone related traffic accidents, resulting in deaths and injuries for both truckers and car drivers. There have been an estimated 29,000 new U.S. improvement projects started since passage of legislation last year, according to the American Road & Transportation Builders Association. Nationally recorded work zone fatalities rose from 590 in 2011 to 857 in 2020. 2016 had 257 large truck-involved fatalities in work zones with 244 in 2020. Trucks are normally involved in 10-12% of fatal crashes but account for 27-33% of work zone fatalities. Most often, crashes involving a truck in work zones are centered around a truck rear-ending a car, or vice versa.

Personally, only one “near miss” moment comes to mind while following a tractor-trailer through a very narrow construction zone on I-70E between Wheeling, WV and Washington, PA. I was pulling an enclosed car hauler with my pickup truck at about a 15k lb. combined gross weight, traveling at 45-55 mph. The tractor-trailer in front of me slammed on the brakes and slowed to about 30 mph without warning – I soon watched the tail of the eight-and-a-half-foot wide trailer clear the barriers on either side with minimal clearance. At the time, my trailer was the same width, but I managed to make it through unscathed, as well, if only barely.

According to Transport Topics, the major contributing factors of truck crashes in work zone areas include:

• Reduced lateral clearance and recovery area due to their length, size, and weight.
• Larger blind spots which make it challenging to merge out of an upcoming closed lane at a work zone.
• Acceleration and deceleration rates that are much different from cars.

• Before setting out on the road, research your route. When possible, avoid work zones and use any detours that are available.
• Be aware of all signage throughout work zones that can indicate reduced speeds, lane changes and other important information. Avoid all distractions.
• Make sure to slow down when entering a work zone and keep an eye out for road workers.
• When approaching lane closures, move into the open lane as soon as possible. Be sure to pay close attention to vehicles around you that could be in your blind spot.
• Always maintain extra space between your vehicle and the one in front of you.

Although the short-term effects of increased work zone construction include an increase in traffic congestion and safety concerns, the long-term benefits of improved infrastructure will create safer roads. Our engineers have been involved in several work zone crash investigations while at CED and are here to provide work zone safety assistance.