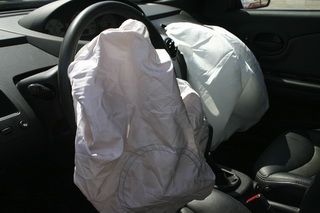 Even though the volume of ‘sudden acceleration’ incidents and media hype has slowed in the last few years, the push by government agencies to regulate the passenger vehicle ‘black box’ looms in the near future.  If a vehicle manufacturer does include a black box in their vehicle (which is a voluntary decision), then the data collected must comply with National Highway Traffic Safety Administration (NHTSA) final ruling 49 CFR Part 563 by September 1, 2013.  In the past, only a few U.S. car manufacturers had released their data to be publicly accessed.
When air bag technology was first being developed, determining when an air bag should be deployed was just as important as the physical air bag itself. After all, deploying the airbag when a driver barely taps a curb or runs over a pothole would create more problems than it would prevent. So, there had to be a way to determine when a driver was in enough danger so that an air bag deployment would be justified. Sensors were placed within the vehicle and thresholds were established within the software that could quickly determine whether or not an event was serious enough to merit a deployment. As a side effect of this automated effort, the air bag system was routinely capturing data and temporarily keeping it in the air bag control module.

Currently, many vehicles equipped with air bags have data control collection modules/EDRs.  Starting in 2005, most car companies included a statement in the vehicle owner’s manual indicating whether or not the vehicle was equipped with such features.  Vehicle Event Data Recorders (EDRs), commonly referred to as black boxes, are part of a vehicle’s airbag control module or powertrain control module.  EDRs can be configured to record a variety of data when a vehicle is involved in a crash event. The data sets range from pre-impact speed and brake use to airbag and restraint system performance. While the recorded data is tremendously helpful in determining how a traffic crash occurred, it was not until recently that a standard existed to determine what and how this data was recorded.  This is the 2013 final ruling.

Final Ruling 49 CFR Part 563 provides a minimum standard for the type of data that EDRs are required to record: at least 15 types of crash data. Some of the required crash data include pre-crash vehicle speed, engine throttle, brake application, measured changes in forward velocity (Delta-V), driver safety belt use, airbag warning lamp status, and airbag deployment times.  In addition to the required data, NHTSA also set standards for 30 other types of data if EDRs were voluntarily configured to record them. For example, if a manufacturer configured an EDR to record engine RPMs or ABS activity, then the EDR would have to record 5 seconds of those pre-crash data in half-second increments.  All data must be able to survive a 30 MPH barrier crash and be measured with defined precision.

A word of caution: ownership of EDR data is not consistent from state to state.  To avoid spoliation issues, a wiser and more cost-efficient strategy might be to save the EDR- containing module itself as evidence, rather than the entire vehicle, and then download the recorded data when permission is granted.  Engineering experts in CED’s Vehicle Crash Group have been trained to download vehicle EDR information in compliance with the updated final ruling.  This data can then be used to reconstruct the accident and opine on liability and contributing factors.  To find out whether or not a vehicle has EDR and to discuss the benefits of this information to your claim or case, please contact CED Technologies.

Submit a case or claim online.
Contact a CED Engineer in your region.