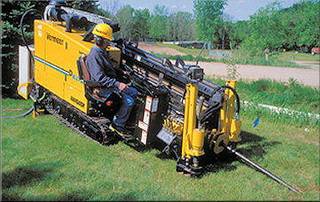 Directional boring, commonly called horizontal directional drilling or HDD, is a steerable trenchless method of installing underground pipes, conduits and cables by using a surface-launched drilling rig, with minimal impact on the surrounding area. The advantages of directional boring are numerous and significant.  It’s a technology that saves time and money.  Because most of the ground surface remains undisturbed, the impact to the surrounding environment, both natural and manmade, is drastically reduced.  Traffic flow in the area where the boring is taking place can continue uninterrupted and communities can remain relatively untouched and visually pleasing.

However, directional boring is an extremely complicated process, and when things go wrong many parties can be impacted and large claims and lawsuits are often the result.  The expression, “flying blind” is very appropriate for the practice of HDD.  The operators must drill holes from point A to B, often under bodies of water or active communities, while avoiding all sorts of treacherous obstacles, such as power lines, waterlines and gas lines that they can’t even see.  And, just like flying, they are operating in a three dimensional space.  They don’t just avoid obstacles by going to the left or the right of them; they are going over major power lines or under large tracts of plumbing.

When things go wrong, the damage can be catastrophic.  Roads can collapse, sewer lines can rupture, or power lines can be cut resulting in widespread outages.  Invariably, insurance claims and lawsuits ensue.  When assessing what happened and who is to blame, finding an engineer familiar with directional boring is essential.  First, the engineer must determine if the boring contractor followed all the correct methods and procedures, that their equipment was maintained correctly, and that the requisite safety protocols were in use.  But, that is just the beginning.  Very often a boring contractor has followed all the correct procedures perfectly and bored the hole exactly where they were supposed to bore it and still a power line is severed or a gas line is struck causing a major explosion and perhaps loss of life.  What happened?  Who’s to blame?  The boring contractor can only be as good as the plans they have to work with.   When boring a hole across a busy intersection, they must not only have the original plans, showing the placements of all the utilities, they must also have the plans for all the follow on improvements and additions.  When the road was widened the water main was moved.  When the office building was constructed, natural gas lines were run to it.  When “fiber-to-the-curb” technology was invented, most of the business’s lining the intersection demanded it.  All of these changes must be reflected in the plans given to the boring contractor, or disaster may result.

If an accident does occur, the paperwork trail can be dizzying.  Which government entity has ownership, city, state or county?  Which utility companies were involved, telephone, power, cable?  Usually this work is done by contractors.  Who hired the contractors?  What plans were they using?  An experienced engineer is necessary to determine the responsibilities of the involved parties.  Were the plans followed?  Were the plans correct?  Who did or did not update the plans?  Who’s responsibility was it?  CED has Civil Engineer’s that have direct “hands-on” experience with directional boring?  They intimately understand the myriad of contractor/subcontractor relationships that exist specifically when government entities are involved.  And, CED engineers have investigated numerous HDD accidents and mishaps. Please contact us at 800.780.4221.