Are You the Cause of Your Freezing Pipes? 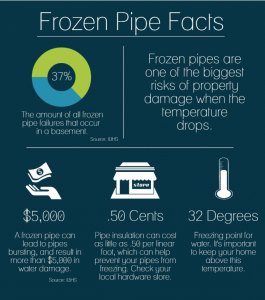 Pipes freeze due to one basic reason: insufficient heat to keep the water inside them from reaching a freezing point.  If pipes are kept in climate controlled areas, then all is well.  But many are not, such as those installed in an unfinished attic, under a house or inside an outside-facing wall.  Sometimes the heat from inside the house will be enough to keep the water in these pipes from freezing.  But all it takes is a well-intentioned vacationer, turning down the thermostat to save power while they are absent to send these pipes into the danger zone.  Vacationers then return home only to be greeted with massive water damage from a frozen pipe they didn’t see coming because they set the (inside) thermostat to a temperature above 32°F.  According to the Building Research Council at the University of Illinois, once the outside air hits 20°F homeowners should be wary of pipes freezing. As a precaution, inside temperatures should never be set below 55°F.

It is commonly thought that a pipe bursts at the point where it froze.  After all, water expands when frozen and that expansion would understandably push outward and break the pipe.  Then when the thaw comes, so does the water.  Although that can happen, what can also happen is that ice will form a slug inside a pipe where the pipe is the coldest.  This slug of ice will not break the pipe, but instead expand along the route of the pipe, conquering new territory as it goes.  Since water cannot be compressed, the water pushed back along that route increases in pressure until it exceeds the threshold of what the pipe can bear.  Then, boom!  Pipe burst!  This is how the damaged part of a failed pipe can be found in a climate controlled area, even though the freeze took place elsewhere along the line.

CED’s engineers can help you determine how the pipes freeze. We have engineers with experience finding the root of the issue and being able to explain the finding to all individuals. If you have a case or claim with frozen pipes contact us at www.cedtechnologies.com or call us 1(800) 780 4221.