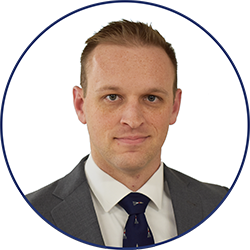 Aaron Carr, M.S.M.E., P.E. is one of CED's Mechanical Engineers who has experience ranging from operation and maintenance of nuclear submarines to shipyard conversion of a multi-billion dollar nuclear engineering plant from warship to training platform. He holds Professional Engineer licenses in multiple states. After graduating from the United States Naval Academy, Mr. Carr served aboard several nuclear submarines within the United States Navy.

Mr. Carr holds a Bachelor of Science degree in Mechanical Engineering from the United States Naval Academy and a Master’s degree in Mechanical Engineering from the Naval Postgraduate School.  While at the Naval Academy Mr. Carr earned his Navy offshore sailing ‘D’ qualification as he skippered sailing vessels in regattas and offshore training exercises.  Rules of navigation and safety at sea were the foundations of his training.